Welcome to our headquarters

Alhamdullilah! We are proud to announce that the IMAH centre is now ready for use. Please make dua for us so that this centre can continue to have programmes that will benefit the Muslims in Hong Kong.

This space can accommodate approximately 30 people. 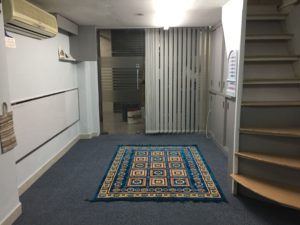 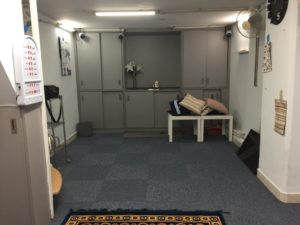 Everything that gets you closer to Paradise and everything that keeps you away from Hellfire have already been taught. The Prophet (peace be upon him) said:

Then why is it important for us to understand this problem? It turns out the answer, the key to this problem is easy. According to shariah that has been agreed upon by the scholars, in general everything is permissible. The reasons are:

It is He who created for you all of that which is on the earth. Then He directed Himself to the heaven, (His being above all creation), and made them seven heavens, and He is Knowing of all things. (Surah Al-Baqarah: 29)

And He has subjected to you whatever is in the heavens and whatever is on the earth – all from Him. Indeed in that are signs for a people who give thought (Surah Al-Jathiyah: 13)

This means in general everything is halal or allowed.

Except if there is a valid and strict prohibition from Allah then the law becomes haram or makruh (disliked). So long as it does not have a valid divine source is found (because some hadith are weak or fabricated) or there is no strict prohibition, then the general rule is applied.

The Prophet said: “If somebody innovates something which is not in harmony with the principles of our religion, that thing is rejected.” (Sahih al-Bukhari 2697 and Sahih Muslim 1718a).

Therefore, it is important for us Muslims to learn our religion from teachers that stick to the Quran and Sunnah. Allah knows best.

Rebecca Hussain, a muslim woman who lives in the US, was born deaf.  In the US, there is a lack of support and facility for deaf moslems to learn the religion of Islam. This contributes to a number of her friends leaving Islam. The deaf people also need to get spiritual satisfaction, and they come to other religion’s places of worship that provide sign language interpreters for the deaf. Seeing this, Rebecca felt that she needed to help the deaf moslems in learning the religion and she started a movement that helps masjids provide sign language interpreters for Friday sermons.

In the interview of a TV show called Guided Through Al Quran, Sheikh Fahad Al Kandari requested Rebecca to read the Quran. She tried with difficulty to recite the chapter of Al Ikhlas. Witnessing this, Sheikh Fahad could not hold his tears. “We are embarrassed”, he said. With all blessings that Allah has bestowed upon us, why we are still far away from the Quran.

Rebecca, despite her being deaf, is actively involved in dakwah work and so far he has helped nine people to recite sahada. Subhanallah. Tell on my behalf even one verse. What have we done for this deen?

Do not expect thank-yous from people

Do not expect thank-yous from people, even if it’s with a kind friend, we should not return the favour.

Allah created every slave to remember Him and He bestows his sustenance upon every creature so that they can become grateful to Him. He does this even though there are many who do not praise and worship Him.
Denial, rebellion and disparagement is a disease that is common to our souls. Because it is a common disease, there is no need to be alarmed or worried when someone belittles or forgets our good deeds. Don’t worry about what people think, even if they show animosity towards you because this could be a sign that what you’ve done is actually good.

يَحْلِفُونَ بِاللَّهِ مَا قَالُوا وَلَقَدْ قَالُوا كَلِمَةَ الْكُفْرِ وَكَفَرُوا بَعْدَ إِسْلَامِهِمْ وَهَمُّوا بِمَا لَمْ يَنَالُواۚ وَمَا نَقَمُوا إِلَّا أَنْ أَغْنَاهُمُ اللَّهُ وَرَسُولُهُ مِن فَضْلِهِۚ فَإِن يَتُوبُوا يَكُ خَيْرًا لَّهُمْۖ وَإِن يَتَوَلَّوْا يُعَذِّبْهُمُ اللَّهُ عَذَابًا أَلِيمًا فِي الدُّنْيَا وَالْآخِرَةِۚ وَمَا لَهُمْ فِي الْأَرْضِ مِن وَلِيٍّ وَلَا نَصِيرٍ
“They swear by Allah that they did not say [anything against the Prophet] while they had said the word of disbelief and disbelieved after their [pretense of] Islam and planned that which they were not to attain. And they were not resentful except [for the fact] that Allah and His Messenger had enriched them of His bounty. So if they repent, it is better for them; but if they turn away, Allah will punish them with a painful punishment in this world and the Hereafter. And there will not be for them on earth any protector or helper.” (Surah At-Tawbah:74)

A story goes, Shajdan, is a father who has raised his child well. He feeds, clothes, educates and makes sacrifices for him and does whatever he can to make his child happy. Then when the child becomes a grown man, he talks back to his parents. Not only does he insult them and act arrogant and he shows his abusiveness through his words and actions.
Therefore, anyone whose kindness is ignored or taken advantage of by people who go against the Fitrah, should face it with a cool head. That composure will be rewarded by Allah, Al Ghani (The All-Sufficient). This advice does not mean you should give up on all the good you have done or to stop doing good to others. This advice is to remind you to persevere and be more resilient towards the negativity that people throw at you.
You have to be grateful to Allah because you were given the opportunity to do good to others when the people around you are cruel. The upper hand that gives is better than taking.

إِنَّمَا نُطْعِمُكُمْ لِوَجْهِ اللَّهِ لَا نُرِيدُ مِنكُمْ جَزَاءً وَلَا شُكُورًا
“[Saying], “We feed you only for the countenance of Allah . We wish not from you reward or gratitude.” (Surah Al-Insan:9)
There are many people that often lose control and become incoherent when facing criticism or being reviled as if they’ve never heard about the behaviour of certain groups of people.

In Quran it says:
وَإِذَا مَسَّ الْإِنسَانَ الضُّرُّ دَعَانَا لِجَنبِهِ أَوْ قَاعِدًا أَوْ قَائِمًا فَلَمَّا كَشَفْنَا عَنْهُ ضُرَّهُ مَرَّ كَأَن لَّمْ يَدْعُنَا إِلَىٰ ضُرٍّ مَّسَّهُۚ كَذَٰلِكَ زُيِّنَ لِلْمُسْرِفِينَ مَا كَانُوا يَعْمَلُونَ
“And when affliction touches man, he calls upon Us, whether lying on his side or sitting or standing; but when We remove from him his affliction, he continues [in disobedience] as if he had never called upon Us to [remove] an affliction that touched him. Thus is made pleasing to the transgressors that which they have been doing” (Surah Yunus:12)

Never get upset when someone whom you gave a pen to would write something nasty about you. This is character of those who are never grateful to his creator. They are ungrateful to Allah, never mind human beings.

Photo by Aaron Burden on Unsplash

This ayat revolves around the Prophet Musa (AS) who ran away from the Pharoah’s army because he accidentally killed an Egyptian man with one punch. Yes, with just one hit. Prophet Musa (AS) was known to be a physically fit and strong person. During the time of the Musa (AS), the estimated travel time it took for a person to get from Egypt to Madyan was eight days (according to Tafsir Jalalayn). Prophet Musa (AS) had a noble character that he would not hesitate to admit when he though he had done something wrong.

When Allah (SWT) ordered him to return to Egypt to preach to the Pharaoh and to face those who intended to kill him because of the crime he committed, Musa (AS) did not ask Allah to be defended by a large army or to provide him with any weaponry or armour. Instead, Musa (AS) prayed to Allah so that his chest would be expanded (open heart) and the knot on his tongue would be untied (clear in his speech).

Perhaps some of us are going through a tough time, just like Musa (AS) and it feels like it’s impossible to get over or to solve. We want all problems to disappear and wonder we have to go through all this, or, even worse, we want to be someone else. Someone who seems to have everything under control and can overcome things easily.

May Allah (SWT) continue to lead us to the right path. Aamiin Ya Rabbal’alamin

Sorry, this entry is only available in Bahasa.